The City of Burnsville maintains more than 225 miles of streets. Employees from all Public Works divisions - including streets, utilities, parks, fleet and forestry - take part in snow removal and de-icing during each winter.

When it snows, it may take up to 12 hours or more to plow 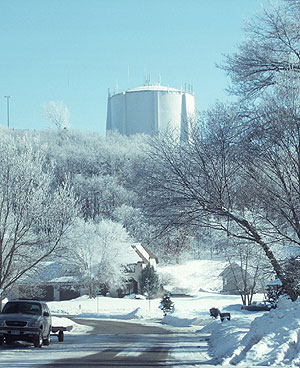 On average, the City of Burnsville receives 48 inches of snow per year, resulting in crews plowing anywhere from 15-25 times each winter, depending on snowfall amounts.

Streets are plowed and de-iced in the following priority:

Crews  usually begin plowing around 3 a.m. to try to have collector streets cleared by rush hour.

The City of Burnsville maintains more than 120 miles of public sidewalks, and 20 miles of park paths.

When a snow storm produces large amounts of snow it may take several days to complete all sidewalk and trail snow removal since crews prioritize streets and heavily accessed sidewalks first.

Sidewalk snow removal begins on the same day as street plowing. If conditions become too severe, crews will focus on high priority areas such as sidewalks adjacent to schools.

Damage resulting from plows and snow removal can happen. The City of Burnsville follows these guidelines when repairing damage: